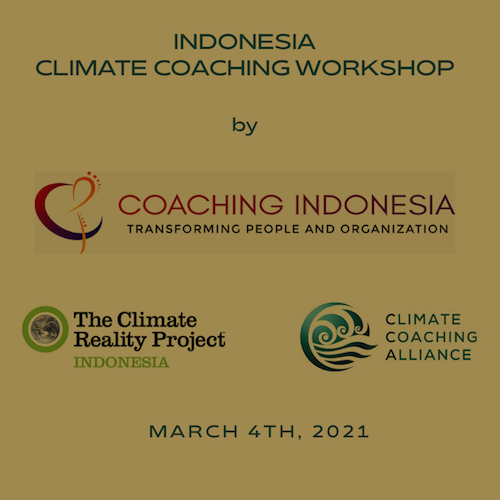 Data from the National Disaster Mitigation Agency shows that Indonesia experienced a rising number of hydro-meteorological disasters from 2015 to 2020, where in 2020 alone, the country saw 1,138 floods and 902 whirlwinds. The Government of Indonesia has committed to ambitious green house gases emissions reduction target and is implementing a comprehensive nationwide response to climate change. The role of non-state actors to accelerate actions to build concrete, ambitious and lasting cooperative initiatives are also recognized.

Coaching, partnering with individuals in a thought-provoking and creative process that inspires them to maximize their personal and professional potential, is one among many actions to address the climate crisis.

Over the last year, 10 professional bodies for Coaching, Mentoring and Supervision signed a Global Statement with commitments to work together to play their part in addressing the climate emergency (www.climatecoachingalliance.org/statement)

·      Increasing participants’ knowledge about the climate crisis, its solutions, and actions

·      Building a network of individuals within climate, environment, and coaching communities who are committed to take real actions for humanity.